Are you familiar with Welsh cake? I wasn’t, but as soon as I read the name, my mind indulged in beautiful visions of a dense, decorated delicacy.

Welsh cake doesn’t fall in that category—not at all. The cakes look like a cross between a thick cookie and a small pancake. What they lack in looks, they make up in quantity, distinctive texture, and a taste that somehow reminds you of home. They are cooked on a griddle and have just the right amount of sweetness and substance.

Originating around the second half of the 19th century, Welsh cakes became popular at a time when pantries were stocked with flour, sugar, eggs, lard, and dried fruit. As a tasty tea-time treat, they are best when eaten warm but are hearty and last for a week in an airtight container. Since they are the perfect size to fit into a pocket, they became treats that miners carried to work and school children often had for lunch.

Over time, Welsh cake recipes had slight variations and have been called different names, such as cage bach, picau ar y maen, pice bach, tishan lechwan or tishan ar y mân, depending on the region of Wales where they were made. In English, they have been known as griddle cakes, Welsh tea cakes, and Welsh miner cakes.

“Welsh cakes are an example of a unique and traditional food that reflects the resourceful, wholesome, and practical nature of the Welsh people,” said Denise Carbone on her website, Welsh Baker.

The following recipe and directions are modified from the Daring Gourmet. I added a few of my own observations and increased the ingredients by half. This recipe made about 20 Welsh cakes.

Recipes are important treasures of family heritage. Do you have recipes that have been passed down? Consider sharing them on the FamilySearch Memories App to preserve them for future generations! 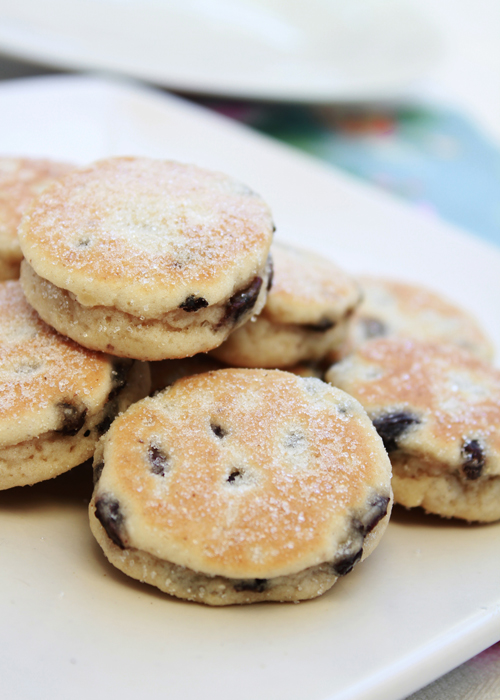